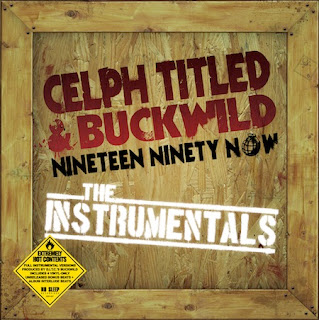 For me there wasn't even a question which was the best produced album of 2010 and in turn the best album overall too, the unique Buckwild and Celph Titled project 'Nineteen Ninenty NOW' (click to read my review). The beats were vintage D.I.T.C. beats straight from the mid '90s and there weren't a single filler track on the entire disc. Celph Titled ain't no slouch on the mic either and it had plenty of amazing posse cuts but this is without a doubt one of those album that will be a masterpiece with or without lyrics. The 2xLP will be released via Fat Beats on May 10 and DJ Pizzo Celph has announced that he and Buck are working on an EP entitled 'Nineteen-Ninenty-More!'. This will include three non-album collaborations (maybe Celph ripping Buck beats from this decade) as well as tracks recorded for the LP that didn't make the final cut. Peace to Taskmaster for spreading the word to me.
SPOTTED @ HIP-HOP SITE
Posted by lost.tapes.claaa7@gmail.com at 9:42 AM