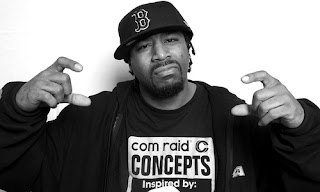 Edo G (or Ed O.G. as he was originally known) has been representing real hip-hop and his birthplace of Boston since way back in the early '90s. Besides the classic albums with his crew, The Bulldogs, he's worked with Scientifik before his passing, dropped some great solo projects, made collaborative LPs with Pete Rock and Masta Ace and put together the underrated Special Teamz. In other words Edo been there and done that, so when he recently called his upcoming album "his best one yet", the expectations went straight through the roof.

The album, which he calls 'A Face in the Crowd' and is scheduled for a May 17 release, will feature production work from DJ Premier and Statik Selektah among others. The first single from the project, "Righteous Way", has landed and is now available for download below. Shouts to Big D O and Pure Hip Hop Blog for the link! Also check out this recent live clip of Edo G performing (one of?) the DJ Premier track from the album, sounds unbelivably dope: