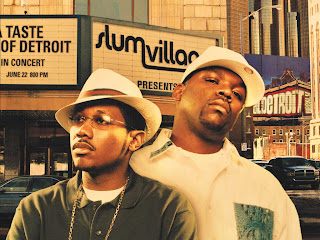 Two of Detroit's illest hits us up with two singles from their respective ways. It wasn't long ago we considered eLzhi and T3 as good friends and Slum Village compadres but with the last SV album, last summers "Villa Manifesto" the shit hit the fan and both their business and personal relationships disolved. You can read all about that elsewhere if you're interested, at least the guys are still going strong and bringing new music for the fans.
eLzhi is preparing his ode to NaS's classic "Illmatic" which he calls "eLmatic" and is set to drop on May 10 this year; we already heard his "Verbal Intercourse Part II" and now he gives us a look into his "Detroit State Of Mind". Phew, what a banger!
T3 has worked with Slum Villa producer Young RJ and his single is closer in sound and vibe to what we heard on "Villa Manifesto". Which one do you prefer?
eLzhi - "Detroit State Of Mind"