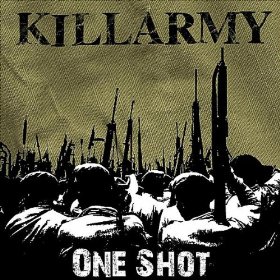 The new Killarmy single, "One Shot", was released via Amazon.com today. This is one of the tracks 4th Disciple produced for the comeback album they've been working on for a while that's been reported about through various video clips, interviews and a scrapped single. According to Napalm/Dom Pachino affilliate Bugsy Da God the business around this joint hasn't been handled properly, as neither Dom or producer 4th Disciple has been involved in or even told about this leak which was provided through Amazon by 9th Prince soley. This has reportedly made them both back out of the project despite several recorded tracks and it now looks like the album won't be released at all. I really hope this ain't the case, since alot of fans have been fiending for this LP for a decade and to hear them all (save for Killa Sin) rhyme over this militant banger sounds too good for the project to be wasted over some internal beef. We can only wait to see what happens and hope for the best, in the meantime take a listen to the track provided below - high quality mp3 rip now available.
KILLARMY - "ONE SHOT"