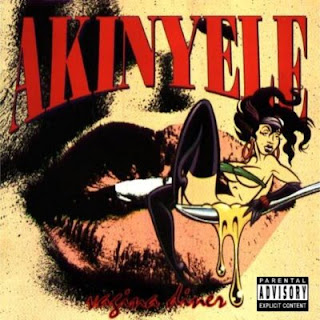 This debut album of nasty-ass Queens rapper Akinyele was released in 1993 via Interscope Records and was one of two projects fellow Queens resident, producer extraordinaré Large Professor were working on at the time. The other was, as you surely knows, what turned out to be the extremely critically acclaimed debut of QB's real prodigy, Nasty NaS. Both rappers had been under the producer's wing for a number of years and were collectively introduced by him on the masterpiece of posse cut that is "Live At The BBQ" which appeared on Main Source's equally impressive full-length, 'Breaking Atoms'.
Besides the obvious differences in the two emcee's styles there was also a significant factor in the way that Large Professor approached his work that separated them. For 'Illmatic' he was instrumental in shaping the album by helping NaS picking out the right beats and introduce him to talented friends of his, like Q-Tip, Pete Rock and DJ Premier besides conducting three fantastic beats of his own. With Akinyele and 'Vagina Dinner' he engaged himself in producing all of the albums thirteen songs, something we haven't seen to many times in the career of Extra P, which makes it all the more special. The ruff voiced rapper's full potential is unearthed over the hardcore brew that the producer cooked up for him, using several pinches of jazz, funk and rock samples tastefully juxtaposed against walls of hard breaks and droning bass-lines; all conducted on his legendary SP-1200 machine. As a big red cherry on top, turntable maestro Rob Swift of The X-Ecutioners added his breath-taking cuts and vocal scratches all over the LP.
Maybe The AK didn't have the polished verbal talent of NaS but he provided a large dose of raw humor, a unique voice and a potent enough delivery to match the incredible beats. Despite this the album failed to make any noise on the charts and in the shadow of 'Illmatic' a year later it was more or less forgotten and has since gone out-of-print. The tasty 'Vagina Dinner' has become a rarity these days, with prices for used copies ranging from between $50 and $100 on sites like Discogs and eBay. As we have yet to see a re-press of it and it's been in my rotation the last few days I wanted to share this with my readers as I would imagine it would be interesting to all of you considering the history and production on it. Even if you have heard it before maybe now is a proper time for a revisit? Just don't forget to TURN IT UP!!
01. "Worldwide"
02. "Outta State"
03. "AK Ha Ha! AK Hoo Hoo?"
04. "Dear Diary"
05. "Bags Packed"
06. "The Bomb"
07. "Interlude Beat"
08. "Checkmate"
09. "I Luh Hur"
10. "You Know My Style"
11. "Exercise"
12. "No Exit"
13. "30 Days"

AKINYELE - "VAGINA DINNER"
Posted by lost.tapes.claaa7@gmail.com at 2:19 AM

Email ThisBlogThis!Share to TwitterShare to FacebookShare to Pinterest
Labels: Akinyele, large pro, Out of print