Here's a real rarity from a very dope artist that alot of people don't know about; Daddy Rose. I first heard him back in early 2000 when Killah Priest dopped his sophomore LpP "A View From Masada", where he introduced this new crew that featuring Saulahdin and Daddy Rosse. The duo called themeselves The Black Rose Kartel. and appeared on the songs "Maccabean Revolt" and "Live By The Gun" as well as "Thug Revelations"  from the "Priesthood" album.
It's likely that Priest and Daddy Rose go way back since they are both from Brownsville, New York and it's been mentioned that it was these two who were originally supposed to form the group Maccabeez together. Daddy Rose released a double-sided 12" single followed by a sampler for his upcoming album "The GOD" in 2001, on the short-lived label Excelsior Empire Records. As the label folder the full album was never released which is a real shame since it sounds straight up incredible judging from the sampler of it and its single.
I got a rip of "The GOD: Music Sampler"right here, the songs more or less around 1:30, but for the three tracks that appeared on the single I added them on there instead so at least 3 of the 12 songs are heard in full. Guest spots include alot of heavy weights, he seemed to be especially tight with AZ who's on a couple of songs, Heltah Skeltah, Killah Priest, Amil, John Forté and of course Black Rose Kartel.
A few years later he changed his name to El Shabarr which you might recognize from the classic AZ single "I'm Back" where he spits the last verse over an ill Buckwild beat. I added that as a bonus track at the end of the sampler/promo. It's unlikely we're gonna get to hear any more music from Daddy Rose again unless someone raids the vaults since he's currently serving life in prison according to Wu International.
' 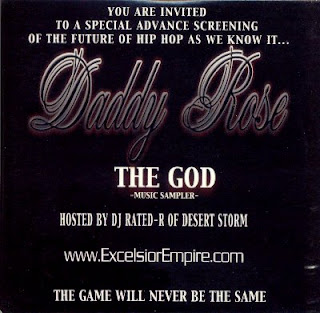