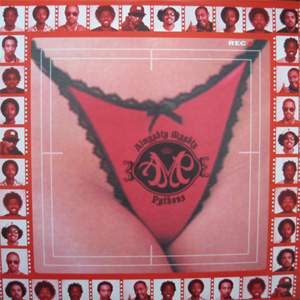 Two of the West Coast's illest underground crews in Souls of Mischief and The Pharcyde united in 2002 to form The Almyghty Myghty Pythons. They were supposed to release a full-length from what I remember but the collaboration begun and ended with this 12" maxi-single, or EP if you will, also released back in '02. It's easy to see that an album had plenty of potential, considering their past track records of course, but also by listening to the three tracks featured on here.
"AMP" and "Contact" were produced by The Pharcyde's Bootie Brown while founding Soul's member and incredibly underrated beatmaker A Plus handled duties on "Curb Your Nerve". The last mentioned are without a doubt the finest track on the single and is the reason I'm even posting this since that was on heavy rotation for me and the fam back when it came out and several years afterwards. It has all the trademarks of a bangin' Souls of Mischief song, you know that dreamy, sun filled that would infiltrate your mind like a musical equivallent to some high-powered cheeba. Of course having The Pharcyde do their thing over such dope soundscapes wasn't nothing to complain about either, to be honest it is probably the finest production they spat over since the best tracks on 'Labcabincalifornia'
So if you forgot how damn sweet this 12" single really was, or if you haven't heard it at all you can hit the download below since it's obviously an out-of-print release by now. If you're hung-over on this Sunday morning, I suggest you skip directly to track A2.
Almyghty Myghty Pythons - "AMP EP"
Posted by lost.tapes.claaa7@gmail.com at 3:34 AM

Email ThisBlogThis!Share to TwitterShare to FacebookShare to Pinterest
Labels: 12" Throwback, EP, Out of print, West Coast