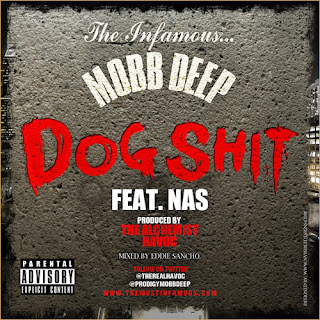 As I reported around this time yesterday the newly released Capital P and his partner-in-rhyme had been in the studio together with The Alchemist and another Queensbridge legend, suprisingly one that have seemed to avoid QB like the plague since around 2002 - Nasty NaS. Both the clean and dirty versions has just been released to the net but who the hell wants a clean version of a Mobb Deep/Nas joint called "Dog Shit"? Havoc on the boards, Alchemist right by his side and Eddie Sancho of D&D/DJ Premier fame making sure shit sounds perfect. Let me put it like this - The Mobb is back!
MOBB DEEP FT. NAS - "DOG SHIT"
Posted by lost.tapes.claaa7@gmail.com at 2:19 AM