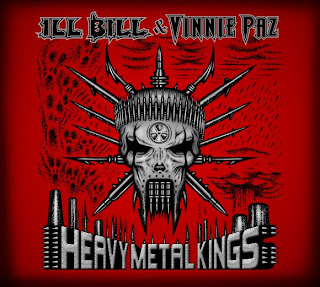 Ill Bill and Vinnie Paz is finally releasing their long planned collaboration, 'Heavy Metal Kings'; the album is supposed to be nothing but pure hip-hop and the title of course come from the amazing Jedi Mind Tricks / Ill Bill record from 2006. Both artists have released really good solo projects leading up to this, Vinnie's 'Season Of The Assassin' had plenty of impeccable songs both lyrically and especially beatwise (what coulld you really expect with tracks by Lord Finesse, Lil' Fame, Madlib, 4th Disciple, DJ Muggs, Da Beatminerz, etc.).
Ill Bill went a different route with his solo last year, having DJ Muggs produce, score, direct and oversee the album front-to-back and what a chemistry the two showed together. 'Kill Devil Hills' was one of the best albums of 2010 and it also featured Vinnie Paz on the masterpiece title track. The track below could be seen as a continue of that, as it's DJ Muggs sole contribution to the album and is a great track. ORDER 'HEAVY METAL KINGS' HERE.