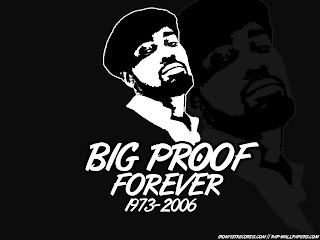 Can you believe it's been more than five years since the undisputable best member of D12 (together with Eminem), sadly passed away. His voice was something distinct and real special, he touched on a lot of great topics both with 5-Ela, D12 and of course his solo career. It's a fucking tragedy he had to go so young but that's sadly how life often works., I wish we would've gotten an Eminem and Proof collabo with production from Dre, Dilla, Hi-Tek, Da Beatminerz, Mr. Porter, Eminem (he's hit or miss but it's hard to deny that he has produced certrain records that's straight up incredible (and i'm not talking about the "Encore" bullshit, "Beautiful" and others but think "Renegades", "We Ain't", ""Til' I Collapse", "Patiently Waiting", etc. Proof and Eminem was the core of D12, without them I think they should even change their names (well maybe Em will be on there but i think he'd be the exec and has maybe a lot of beats and a few verses.
Since the fifth anniversary of his unfortunate passing took place yesterday I'm a bit late, but as I like to say it's better than never, right. It was Peter Rosenberg who unearthed this prevously unreleased gem earlier today, Proof and T3 spitting over an official Jay Dee beat and the song is "The Fizzo", I have no clue when this was recorded or if we have heard the Dilla beat before because I can't listen right now but no matgter what, it's not everyday we get unheard material freom Big Proof and previously unreleased from Jay dee. T3 appearing on here too is like the cherry on top, the original Slum Village for life man! Definitely check this one out ASAP and drop a cimment on your thoughts. Rest in peace Big Proof, you're sorely missed!
PROOF - "THE FIZZO"
(Ft. T3 and Jay Dee of Slum Village)
Posted by lost.tapes.claaa7@gmail.com at 5:37 AM