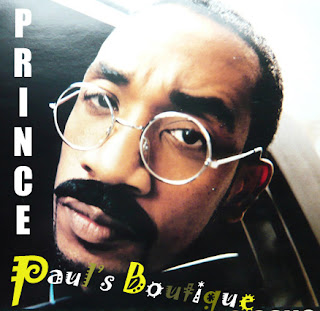 A few weeks back I posted a compilation of Prince Paul material released between 1990 and 1994 (and sporting a cover I was almost ashamed of having on my iPod). As Prince Paul projects like the first Handsome Boy Modeling School joint with Automator, "Prince Among Thieves", the Gravediggaz and De La Soul albums has stayed in pretty constant rotation in my CD and mp3-player since then, I thought it was time to follow up on the concept.
As is usual on the compilations here on The Lost Tapes you are not likely find the tracks you'll find on retail albums such as those mentioned above as I encourage any fan of the material presented below to instead pick up those releases. My aim is not to make some sort of Greatest Hits album but rather provide a mix of rare or unreleased songs, B-sides, 12" only remixes, guest productions and soundtrack joints that I find interesting. This time the focus lies on Paul's outside production ranging from between 1995 and 2003. By making sure of including all of his usual eclectic tactics of mixing hardcore breaks and pounding bass-lines with weird samples from all imaginable sources and genres as well as tracks featuring both obvious and not so obvious artists this tape came out straight BANGING!
01. Biz Markie & Chubb Rock - "No Rubber, No Backstage Pass"
02. Gravediggaz - "Mommy What's A Gravedigga" [Paul's Cali Mix]
03. Beastie Boys - "Root Down" [Prince Paul's Baloon Mix]
04. Last Emperor - "Monolith"
05. Bootsy Collins - "If 6 Was 9" [Prince Paul's Instrumental Mix]
06. Dr. Octagon - "Blue Flowers" [So Beautiful Remix]
07. Metabolics - "Lyrical Chemical"
08. Del Tha Funkee Homosapien - "Signature Slogans"
09. Jon Spencer Blues Explosion - "Blues XXX Man" [Remix]
10. J-Live - "Wax Paper"
11. Gravediggaz Ft. Craig G - "Don't Be Afraid Of The Dark"
12. The Avalanches Ft. Breezly Brewin - "Since I Left You" [Remix]
13. MC Paul Barman - "Bleeding Brain Glow"
14. MF DOOM Ft. MC Paul Barman - "Hot Guacamole"
15. Beastie Boys - "Negotiation Limerick File" [Handsome Boy Modeling School Makeover]
16. Last Emperor - "Secret Wars" [Prince Paul Mix]