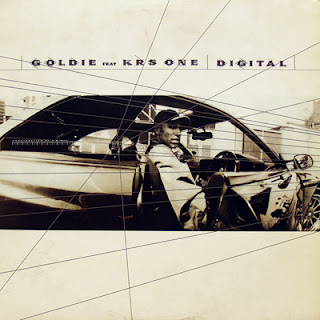 A few days ago, I finally got a good amplifier and some speakers for my Stanton Tables which means I'm finally able to play all my old vinyl albums and 12" singles again. Digging through my crates, I came across several amazing 12" releases that I had totally forgotten about. This means that the section of "12'' Throwback" will appear alot more often, Moving on, my choice for today is....
Back in the mid '90s, I was a pretty big fun of drum'n'bass/jungle music and one of my favorite producers was Goldie, based on his classic "Timeless" LP that was a commercial success but also pushed the boundaries of what D&B could be without selling out. It's an amazing album that I would strongly recommend you to check out some time. In 1997 it was time for his sophomore release, titled "Saturn'z Returnz", another (double-) album which proved the artist wasn't afraid of pushing the bounaries. Disc 1 features only one song, a 60 minutes long dedication to his deceased mother incorporating elements of sinister jungle, long passage of classical music and fusings of many different styles. The second disc featured collaborations with Noel Gallagher of Oasis and more importantly Boogie Down Production's own KRS-One.
As I mentioned I used to be a big fan of drum n bass back in the day which doesn't suprise me the least since it's basically hip-hop beats played at a breaknecking speed over basslines that could blow out windows. To prove how close jungle and hip-hop actually is, the first single from "Saturnz Return" was the joint that featured none other than KRS riding the autobahn speed  of the beat like he never had one anything else in his life. Another proof that Knowledge Reigns Supreme could kill any, and I mean ANY, track he jumps on; especially back in 1997. The 6 minute epos, which is filled with quotables, and although it might be too outdated for the dancefloors toay I woud imagine "Digital" would get the crowd in a frenzy back in '97. Goldie and Robert Playford's production is classic neckbreaking drum-n-bass and KRS-One does an impeccable job with the MCing.
There's been plenty of different versions of this 12" released, as is often the case with jungle music, featuring instrumentals, radio edits, full-length versions and more importantly remixes by Armand Van Helden, DJ Boymerang and even Soul Assassins' DJ Muggs. Out of all the different releases of this particular, 12", The Muggs remix only appeared on an italian promo; a rare record if I ever knew one. Luckily for me, and all The Lost Tapes readers, I came across a rip of that version on the T.R.O.Y. Forum (provided by Mista' Mo - muchos gracias) . It's funny because I actually bought the "Digital" VLS while on a trip to Italy but it did not feature the Soul Assassins remix. Since it's such a rare track that I know alot of hip-hop heads has been dying to hear, I'm adding it to the tracklist for y'all. Enjoy!