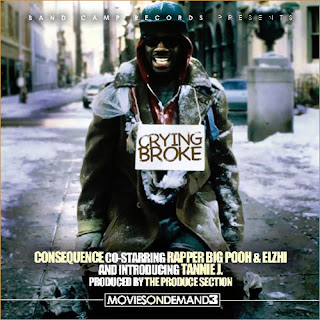 Consequence seen alot of trials and tribulations in this record industry. He was introduced to the world through his cousin Q-Tip's group A Tribe Called Quest and their fourth album "Beats, Rhymes & Life" where he appeared on no less than six tracks. He wasn't quite the sharp MC you'll hear today but he was far fom wack but Phife Dawg felt Tip was trying to have Cons take his place in the group. As a result, Cons was nowhere to be found on the next, and final, Tribe album and after landing a record deal with Jive which only led to his mid-'90s debut album "Hostile Takeover" was shelved (click the link for a collection of the leaks from that LP).
Since then, the MC has made connections with KanYe West and kept in contact with his cousin, even getting signed to 'Ye's G.O.O.D. Music label, spending 2010 completing his second G.O.O.D. Music album. After feeling neglected by the label and accusing labelmate Pusha T of stealing his lyrics, he cut ties with both Q-Tip and Kanye West. Over the years he's become quite a talented rapper and he's getting ready to take over the independent scene with his mixtape series "Movies On Demand".
Next in line of that is 'Volume III' which will most likely feature several of the songs he recorded while at G.O.O.D. Music and today he let loose of a gem from the project, strictly taking it back to the '90s boom bap. The track is called "Crying Broke" and is produced by The Produce Section. "Movies On Demand III" will be released sooner than you think on Bandcamp Records according to Cons' and I got a feeling this should be something to check for whenver it drops. This track in particular features verses from Elzhi, Rapper Big Pooh and introduces Tannie J. on the hook. Comments?
CONSEQUENCE/ELZHI/BIG POOH - "CRYING BROKE"
Posted by lost.tapes.claaa7@gmail.com at 12:23 PM