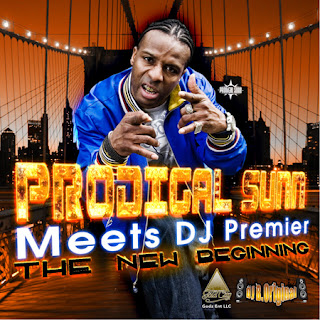 Prodigal Sunn of Sunz Of Man was always one of my favorite Wu-Tang affilliates, and definitely one of the more underrated. Despite appearing on several huge projects including the Clan's "Iron Flag", "RZA as Bobby Digital in Digital Bullet" and DJ Muggs/GZA's "Grandmasters" and being the most heard voice on Sunz Of Man's two official albums, many people wouldn't know him by name. He only released one solo project in his entire career though, 2005's "Return Of The Prodigal Sunn" which failed to live up to its potential, much because of mediocre production, save for a few gems.
Average production is hardly a problem on this brand new mixtape which is based on the prodigal son ripping up classic DJ Premier instrumentals. Beats include masterpieces like Group Home's "Supa Star", Jeru's "Ain't The Devil Happy" and Royce's "Boom" and "Hip-Hop" to name a few. But there's also about two or three tracks I don't really recognize, but considering Preem's vast catalouge it's hard to say whether this tape has any exclusive instrumentals; one thing that's sure is how dope P.Sunn sounds over these joints though. I'm not sure how involved Preemo really is in the creation of this tape, but it does feature several interludes narrated by the great producer. The name of the mixtape is "The New Beginning" which hopefuly is an indication that this is the start of a P.Sunn renaissance. Check out the rapper @ MySpace where the mixtape link below was originally uploaded.

PRODIGAL SUNN MEETS DJ PREMIER - "THE NEW BEGINNING"
Posted by lost.tapes.claaa7@gmail.com at 7:28 AM