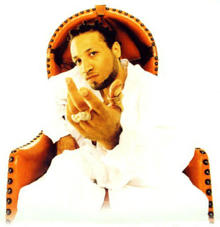 10 years ago, on June 15, 2001, the hip-hop community faced the loss of another incredible emcee to the tragic faith of passing away far too soon. He was born as Anthony Berkeley but came to be more known to the world as Poetic, Too Poetic or Grym Reaper.
Growing up in Long Island, New York, with roots in Trinidad and Tobago, Anthony Ian Berkeley found himself in love with the exploding hip-hop culture. By the late '80s he had honed his skill into the art of a wordsmith while building a name for himself as a vicious battle MC in the streets of Wyandanch, Strong Island. Berkeley would go on to rhyme as part of several different rap crews, finding himself in groups along future legends like Rakim and Teddy Ted.
Together with two local DJ friends, DJ Kaos and Woody Wood, he formed the group Too Poetic while taking on the alias of Poetic for himself. The trio would soon catch the ears of an A&R at Tommy Boy Records who signed them for an album and single deal in 1988. Together with co-producer James Nathaniel Tinsley, who would later form Island Noyze Productions, they transformed their given studio time into the full-length album "Droppin' Signal". Preceeding the planned LP release, Tommy Boy Records tested the waters with the Too Poetic single "God Made Me Funky" / "Poetical Terror" in 1989. While the Paul C. assisted "God Made Me Funky" has grown into a classic on the low over the years, at the time of its release the single didn't make the noise Tommy Boy had hoped for. The label got cold feet and decided to temporarily shelve "Dropping Signal'", causing the trio to request being dropped from their deal. The '88-'89 LP was left unheard by the world until only one or two years ago, when freelance writer Jesse Serwer managed to get his hands on the project through DJ Kaos. Head over to Serwer's blog to check out the album in full and read the extensive interview with DJ Kaos. 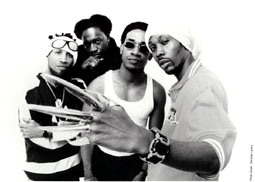 Although the deal fell through, leaving Poetic's career in limbo, the situation with Tommy Boy would turn out to be a crucial moment for the future of Poetic as an artist. Being signed only to be burned by the record industry, and by the Tommy Boy label in particular, was an experience that he shared with three other current hip-hop cats; Prince Paul, Prince Rakeem/RZA and Frukwan. Around '91 this quartet combined forces to form the "horrorcore" group The Gravediggaz who instantly started to work on a demo tape. The result was a deal with GeeStreet Records and the biggest record of Poetic's entire career - Gravediggaz's 1994 debut LP "Niggamortis" (later retitled, and more commonly known as, "6 Feet Deep"). The years that passed between "Droppin' Signal", the bitterness of being dropped and surrounding himself with the talent of his new crew helped transform the Long Island native into one of the most unique and original MCs the hip-hop world has yet to see. His unorthodox style of flow and array of outstanding lines urged producer Prince Paul to often use Poetic to set songs off, to great effect.
The rest is somewhat, "as they say", hip-hop history. After another succesful group album on GeeStreets in '97, "The Pick, The Sickle & The Shovel", the quartet was reduced to a duo; leaving only Frukwan and Poetic on the mission of digging up the graves of the mentally dead. Despite lacking the presence of the more famous RZA and Prince Paul, Gravediggaz continued being a force to be reckoned with which was proven with their third and final album. "Nightmare in A-Minor" was completed and first released in 2001. It didn't make half the impact either of the two previous joints did, but it's still very worthwhile material that features tons of amazing verses on the behalf of both Frukwan and Poetic.
Around 1999, Anthony Berkeley was diagnosed with colon cancer and given an estimated time of four months left to live. Even after such a devastating blow to him and his family, Poetic continued to record music and grow as an artist; sharing his pain and the truth about his condition on "Burn Baby Burn" (Gravediggaz) and "One Life" (Last Emperor). He beat the doctor's original estimation with over two years but finally returned to the essence on June 15 of 2001. His spirit continues to live through his memory and all the music he left behind although it remains a travesty that he hasn't been inducted into the "hip-hop hall of fame", so to speak. Chuck D of Public Enemey commented: "Here's a cat that recored terminally ill, for his love for life, his family and music. How it must've sounded silly when he saw and heard cats complaining about dumb beefs, fame or some little insignificant hood problem ... No, this rapper wasn't shot in some hood brawl, didn't pass on some wreckless auto accident and didn't self inflict harm. He was taken by the misfortune of fate. We should think about how lucky we are and stop sweating the small stuff and appreciate life. Too Poetic should remind us all of how precious this life is".
01. Too Poetic -  "God Made Me Funky" [Paul C's Funky Mix]
02. Too Poetic - "Poetical Terror" [Funky Mix]
03. Gravediggaz - "1-800 Suicide" [Poisonous Mix]
04. Gravediggaz - "From The Darkside"
05. DJ Honda / Gravediggaz - "We Run Shit"
06. Celestial Souljahz / Poetic / R.H. Bless - "Ghetto Apostles"
07. Celestial Souljahz / Poetic / Yogi - "Angels Of Death"
08. Maxim / Poetic - "Worldwide Syndicate"
09. Poetic - "Savior"
10. Last Emperor / Poetic - "One Life"