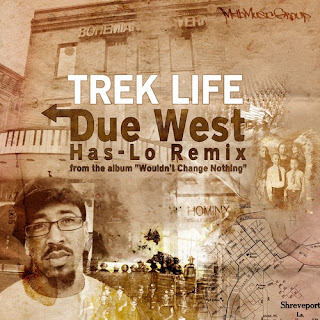 As reported previously, California rhymer Trek Life decided to complete an entire remix album of his previous project, the free Oddisee laced "Everything Changed Nothing". The new project, which is called "Wouldn't Change Nothing" is out digitally today and features remixes by Apollo Brown, Has Lo, J. Bizness, Slimkat78, MavWon, Audible Doctor and others plus two new, exclusive song(s) produced by Oddisee.
On the song above, Has-Lo, mostly known for his rapping skills, further shows his production skills. Here he's flipping Oddisee's original version into something more dark, sinister and brooding to match Trek Life's rhyming subject. The dope artwork displayed above was created by Alvin The Third. Below is the tracklist for the project and a link to the Has-Lo remix. If you like what you're hearing you can order the album digitally or pre-order the CD (which is available on August 2) from the following links; iTunes or Fat Beats.