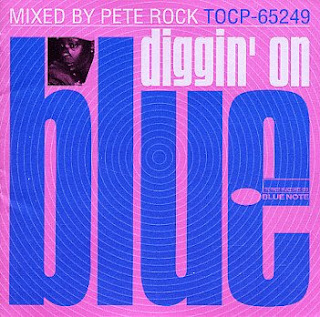 This one is a classic but rather rare mixtape by Pete Rock that I've been revisiting a bit again lately. For some odd reason this fantastic mix was strictly limited to a Japan release where it was available on cassette and CD via EMI's Toshiba label in 1999. Now be warned that this is not your average hip-hop mixtape and is certainly not for everyone. The project is sort of Pete Rock's way of paying tribute to the jazz legends whose music he grew up on and would inspire him to become one of the best hip-hop producers the world has ever seen. As the title suggests the 16 tracks picked by Pete for this mix all comes from the Blue Note catalouge, one of the most succesful and famous jazz labels there ever was. These artists and songs have inspired hip-hop artists for decades, and many of them have been used in sample form to create new timeless classics by groups like A Tribe Called Quest, Gang Starr, D.I.T.C. and of course Pete Rock himself.
Between this and Madlib's "Shades Of Blue" (2003) these type of releases are one of the best ways for a hip-hop head to break into the incredible music known as jazz. The two genres shares alot of common ground and not at all exclusively through the sampling of old jazz records. I often say that the guys who rocked the jazz scene back in those days, would be the same guys doing hip-hop if they were born in this day and age. Matter of fact, I wouldn't be suprised if someone like Dilla actually was John Coltrane reincarnated. So even if you don't listen to jazz, at least take some time out to check out Pete Rock on the wheels of steel. Who knows, maybe you'll dig this shit alot more than you would expect?
Included in the actual CD package were a few rare pics from the '99 recording session and an interview with Pete Rock about his fascination with these artists and their music, the Blue Note catalouge and his motives behind putting this mix together. You can check out all that right here @ Discogs.