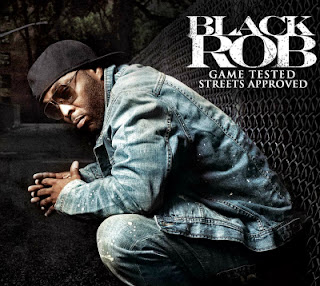 After a long hiatus due to serving a four year bid between 2006 and 2010, Harlem's Black Rob signed with Duck Down Records as soon as he was released from prison. His third album "Game Tested, Streets Approved" which will be available in stores on July 26. His debut LP "Life Story" was a dope album that featured his breakthrough single "Whoa" while his sophomore effort, "The Black Rob Report", didn't quite live up to his debut, it was a remotely stellar project.
Therefore it will be interesting to see whether or not "Game Tested..." will live up to the hype; Black Rob is clearly a talented guy and Duck Down isn't exactly known for delivering weak albums. One thing that all three of his projects have in common so far is that D.I.T.C. producer Buckwild has been a part of them, often producing the finest tracks on the LPs (he even did "Whoa"). I got the two Buck laced joints from "Game Tested..." right here, sharing them with The Lost Tape readers - thx to FasterBlade for the heads up!
BLACK ROB - "WELCOME BACK"