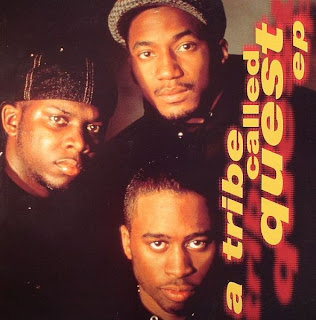 I already did the De La Soul and Black Sheep tapes, so it's only right that A Tribe Called Quest is next in line (never been much of a Jungle Brothers fan, so don't expect a comp with them). The dynamic trio consisting of Q-Tip, Phife Dawg and DJ Ali Shaheed Muhammad hardly needs any further introduction. Their succesful run, resulting in 5 albums, continues to spread joy and getting heads nodding. I recently watched the Michael Rappaport documentary on the group, titled "Beats, Rhymes & Life: The Travels of A Tribe Called Quest" which I strongly recommend to any hardcore fan of The Tribe.

Another thing I can recommend to any hardcore ATCQ fan, besides picking up all of their albums, is to download the compilation presented below. As far as I know this tape has pretty much all the material the group ever released that didn't make their LPs (not counting remixes). From B-sides such as "One Two Shit", "More Jazz (We've Got)" to soundtrack joints like "Glamour & Glitz" (The Show), "Peace, Prosperity & Paper" (High School High) as well as a few rare goodies, including the full Phife Dawg featured "That Shit" (thx to and the unreleased "Love Movement" intro. The songs are all from the period of 1990 and 1998 (when, of course, the group broke up) except for the last track - "I C U (Doin' It)" which was supposed to be the first single from a new ATCQ album in 2003 that obviously never materialized. Most of the songs on here are produced by Q-Tip and Ali Shaheed Muhammad with a few contributions by J Dilla; these guys are extremely talented in that department too, you might see additional tapes collecting outside productions from Tip and Ali. I was too lazy to make a cover so I used one for a limited Jive EP that dropped in the mid '90s as promo for "Midnight Mauraders".

A TRIBE CALLED QUEST - "COMPLETING THE QUEST"
Posted by lost.tapes.claaa7@gmail.com at 2:13 AM