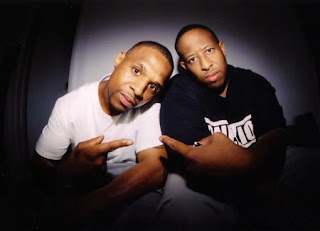 The track link and picture above is all courtesy of the one and only DJ Premier Blog, so all credit to Gim who manages that site. I had no choice but to post this heatrock though - Teflon is such an underrated emcee who ALWAYS bring it whenever he decides to pick up the mic. The M.O.P. afflilate's long-awaited second album "Contraband" has been in limbo for years as the projects status has gone from "coming soon" to shelved, then back to "coming soon" and so forth.
"4 Tha Love" was originally played by DJ Premier as far back as 2005 but it's first now they are letting loose of the CDQ version. This, plus the inclusion of two Teflon songs on the Year Round Records compilation that dropped earlier this year, makes me think that Tef might have decided to try to find a way to combine his fitness lifestyle (he's a personal trainer in Brooklyn) with a rap career. If he chooses to do so, he's definitely getting my money for the job. Also, in case you missed it, don't sleep on his highly unerrated '97 debut LP "My Will".
TEFLON - "4 THA LOVE"
Posted by lost.tapes.claaa7@gmail.com at 4:47 AM