Doom & Starks on a "Victory Lap" 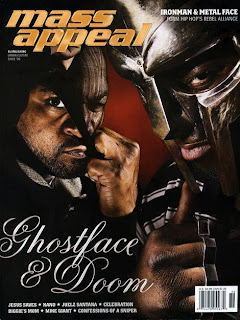 Few promised collaborations between rapping heavyweights has held the hip-hop community in such a tight grip as the long awaited MF DOOM / Ghostface Killah project. The album was supposed to be released through Nature Sounds already back in 2006-2007 as the masked microphone villains even got a cover story in Mass Appeal magazine describing several key tracks from the LP. Around the same time, DOOM produced eight songs for Ghostface's "Fishscale" and "More Fish" albums, respectively, and the chemistry was potent and obvious..

Maybe even more interesting was the single one leaked song from the announced album. "Angelz" was a beautiful sring-driven cinematic MF DOOM beat that had Ghost doing what Ghost does best - vivid storytelling. The song originally appeared on a Nature Sounds sampler in early 2006 but was remixed and revisited for DOOM's 2009 album "Born Like This".

Despite the devoted and loyal fans constant questioning about the infamous project (which by now has become the underground equivallent to Dre's "Detox") and it's current status, the only answer has been silence. Until today that is... Out of nowhere Pete Rosenberg of Hot 97 played this amazing new joint by the masked duo called "Victory Laps". It's also worth noting that the two emcees now seems to have taken on the name of DoomStarks for their work together. The track Rosenberg played on his show today is actually The Madvillain remix - meaning it's produced by DOOM and Madlib in conjunction. And it's absolutely flames too! 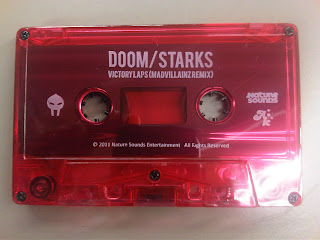 The single will be released in three formats; first out is the strictly limited red cassette tape seen above (an homage to the original purple tape maybe?) which is shipping now. Order it from Nature Sounds Webstore. The second is the serato 12", the one I will be picking up, which is a limited picture disc vinyl that includes the original DOOM version, the Madvillian remix heard below plus full instrumentals to both. All this will be on the A-side while the B-side will have something called a Serato tone but since I don't fuck with Serato and that type of stuff that I really couldn't give a fuck. The vinyl will be available for purchase on August 30, you can pre-order it here. Last, and also least if you ask me, the song will be available in full CDQ to buy from iTunes on July 26. Below you can download the radiorip of "Victory Laps (Madvillianz Remix)" and I also added the original 2006 version of "Angelz" for anyone who might have missed out on it. A good day for hip-hop indeed!
DoomStarks - "Victory Laps" [Madvillian Remix]
DoomStarks - "Angelz" [2006]
Posted by lost.tapes.claaa7@gmail.com at 6:42 AM