"Exotic Species" by NEEK THE EXOTIC 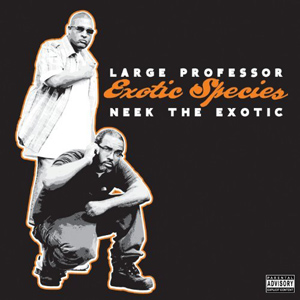 A couple of months back, Queens rapper Neek The Exotic released an album entitled "Still On The Hustle" via Fat Beats. It's a dope release that been getting spins from time toi time, although there's several question marks surrounding its recording and release. It's labeled as a full-blown collaboration with Large Professor but fans of the legendary producer might very well have been dissapointed to find out that he's only responsible for 60% of the 30 minutes disc. What's really strange, however, is that the project was announced already in early 2010 and then called "Exotic Species". I was a firm believer that "Exotic Species" was only a working title of the LP, but a little while ago I found out that's not the case at all. This actually CD exists and was released in a very limite edition sometime in 2010 on the small label Money Maker Entertainment.
The tracklists differs from the Fat Beats release; the mini album still clocks in at around 30 minutes, it also features ten tracks where six of them are produced by Extra P. Besides that there's plenty of differences between the releases that's both very similiar and different at the same time. Atoms Family's Carnage's two inclusions from the Fat Beats release is still intact but he also gets a third placement on here - "You Make My Head Swing" was remixed by The Live Guy Wit' The Glasses and retitled "Personal Freak" for "Exotic Species". Other notable differences include the Tommy Tee produced album closer, "Overseas Offjcjal"; quite the banger actually. Also, strangely enough, appearing on here are two Large Pro/Neek collabo's originally released on a 1999 12" single; "We All About" (a/k/a "Money, Thugs,Murder") / "Turn It Out" while other tracks from the Fat Beats version are missing. It's a weird release that feels more like a street album or mixtape than an actual LP although the actual music is quality.
Below are the newer tracks that failed to appear on "Exotic Species". For the two '99 songs plus a collection of the other Large Pro/Neek collaborations that does not appear on either version of this record, don't forget to grab my compilation "Prelude to the Hustle". Big thanks to Knowbody and KennyKen for hooking me up with this album!
NEEK THE EXOTIC - "OVERSEAS OFFICIAL" [PROD. TOMMY TEE]
NEEK THE EXOTIC - "YOU MAKE MY HEAD SWING" [CARNAGE MXn]
Posted by lost.tapes.claaa7@gmail.com at 7:00 AM