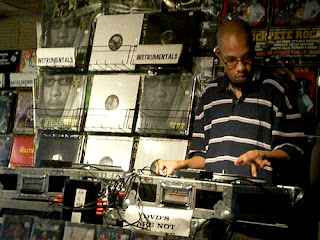 As the K-Def special continues here at The Lost Tapes, following the premiere of "Time's Change" and the unrleased World Renown LP, prepare yourself for some more rare bangers from New Jersey's finest. Working with Marley Marl @ The House of Hits, producing and remixing popular joints for Lords Of The Underground, Intelligent Hoodlum, Real Live, KRS-One and many others.  A few amazing tracks has however managed to slip through the cracks, ending up as limited releases on white label 12"s, often only to be quickly forgotten.
Around mid-'96 when NaS released his break-through commercial single, "Street Dreams", K-Def, a big fan of the rapper, was sent the accapella by Atlantic and requested to remix the track. This limited white label remix gives the song a much grittier street vibe and has become somewhat of an underground classic. A few years later BX bomber Lord Tariq's "This Cold World" found it's way onto limited DJ promo 12"s. This has always been one of my favorite 'Def productions, perfectly utilizing a sample of Sammy Davis Jr.'s "The Shelter Of Your Arms" which might've been the reason the song never saw an official release. Around the same time a rare production for Bad Boy's former star artist Craig Mack was released as the B-side to the WLB 12", "The Wooden Horse". The track in question is a cover of EPMD's classic "Please Listen to My Demo" that uses both the same title and the easily recognizable sample of Faze-O's 1978 song "Riding High".
My last inclusion for the day is not a strictly white label release but is a rare and rather unknown track nonetheless. I'm not sure the exact year this was released, but i'm guessing sometime between mid- to -late '90s. This K-Def remix appeared on the debut single by Alamo, not the Brand Nubian DJ but some R&B group, called "Where's Your Girl Tonight". Download the four songs below and don't forget to pre-order the brand new limited "For Def's Sake" 7" single via Fat Beats or Redefinition Records ASAP!
NaS - "Street Dreams" [K-Def Remix]
Lord Tariq - "This Cold World"
Craig Mack - "Please Listen to My Demo"
Alamo - "Where's Your Girl Tonight" [K-Def Remix]
Posted by lost.tapes.claaa7@gmail.com at 2:11 PM