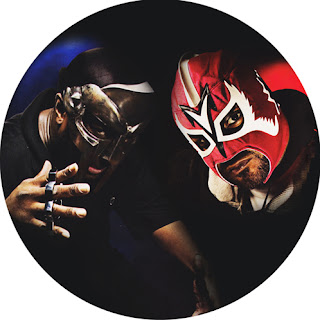 The extremely long awaited full-length collaboration album between hip-hop's two masked villains, DOOM and Tony Starks, is finally being prepared for release on Nature Sounds since being pushed back since 2005. Two weeks ago, Peter Rosenberg premiered the Madvillian remix of "Victory Laps", the B-side of the first single from the DOOMSTARKS project. Today XXL Magazine has obtained the exclusive rights to the worldwide premiere of the A-side, the original DOOM produced version.
The limited edition picture disc 12" single is now available for pre-order, though it runs at a rather pricey 25$. The single features both mixes and instrumental versions of both and will definitely become a collectors item over time. Pre-order the 12" @ Fat Beats now, although the packages won't start shipping until August 30. In further news on the project, the album will be fully produced by DOOM who's also the executive producer of the LP and Ghost will appear on all songs except maybe one or two songs. I've been waiting five years for this project and I'm still hyped as hell for this - how fucking crazy is that?

EDIT: Nature Sounds seems to have given the thumbs up for sites to post downloadable links to this song already, so go ahead and grab the file below. This shit BANGS!!

Posted by lost.tapes.claaa7@gmail.com at 7:46 AM