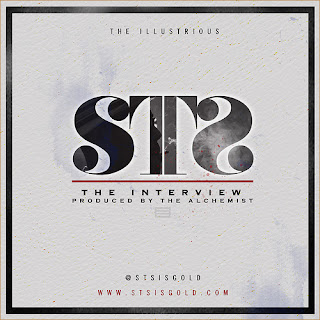 It's not often that you go wrong with an Alchemist banger as he moves closer to one of the all-time greatest producers with everything he touches on. This time Maman lends his production talents to S.T.S., the Atlanta/Philadelphia MC who was been making some noise on the last The Roots album ,"How I Got Over", and is even a part of The Money Making Jam Boys, a quartet consisting of Black Thought with three Roots affilliates. S.T.S. will release his debut album, "The Illusion", later this year and fans can expect cameos ffrom Black Thought and Yelawolf to name a few while producion will be handled by the likes of Ski Beatz, Alc, Will Power and The Knux.
STS - "THE INTERVIEW"
Posted by lost.tapes.claaa7@gmail.com at 1:36 PM