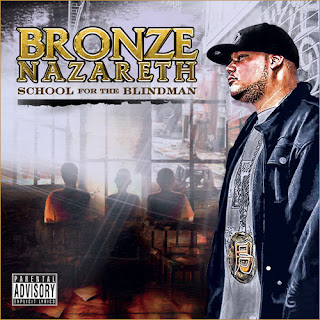 If you're still a Wu-Tang head in the new millenium you should definitely be aware of the Michigan producer/MC who goes by the name of Bronze Nazareth. He was the last member to officially be knighted a Wu-Elementz member, a production team ignited and headed by The RZA himself. Since then he's been hailed by many as the #1 keeper of the W sound, being that his beats is often built on chopped up soul loops, with horns and high pitched vocal samples fading in and out. A tried and tested formula no doubt, but I for one has never truly understood or agreed with the placing of Bronze on that high pedestal. He's definitely been responsible for some extremely amazing beats and though I think his sound often has failed to keep me entertained for an entire LP, I'm looking forward to the follow-up to his 2005 debut, "The Great Migration".
"School For The Blindman" has been pushed back a few years but has now finally been given a date; September 13 is the date to mark in your calendars folks. Mostly produced by the artist himself, the guest list is looking extremely exciting with a handful of Wu-Tang Clan features, Canibus, LAD and Willie The Kid plus Bronze's own Wisemen crew. The most suprising thing on the entire list appears on track 15, a song guest produced by Killah Priest. Huh?
01. "Intro"
02. "Jesus Feet"
03. "The Road" (Ft. Inspectah Deck & Masta Killa)
04. "Fire Implanters" (Ft. LA The Darkman)
05. "Instrumental Interlude #1"
06. "Bronzeman II" (Ft. Canibus & Raekwon)
07. "King Of Queens"
08. "Instrumental Interlude #2"
09. "Fourth Down" (Ft.The Wisemen)
10. "Fresh From The Mourge" (Ft. The RZA)
11. "Malcolm School Skit"
12. "Pictures (Stem Cells)"
13. "Records We Used to Play"
14. "The Letter"
15. "Gommorah" [produced by Killah Priest]
16. "Instrumental Interlude #3"
17. "Reggie" (Ft. Rain The Quiet Storm)
18. "Farewell" (Ft. Willie The Kid)
19. "Cold Summer" (Ft. Salute The Kid & June Megalodon)
20. "Worship" (Ft. The Wisemen)


Don't forget to check out the first single, the RZA collaboration "Fresh From The Mourge" for a taste of what to expect.
Posted by lost.tapes.claaa7@gmail.com at 3:50 AM